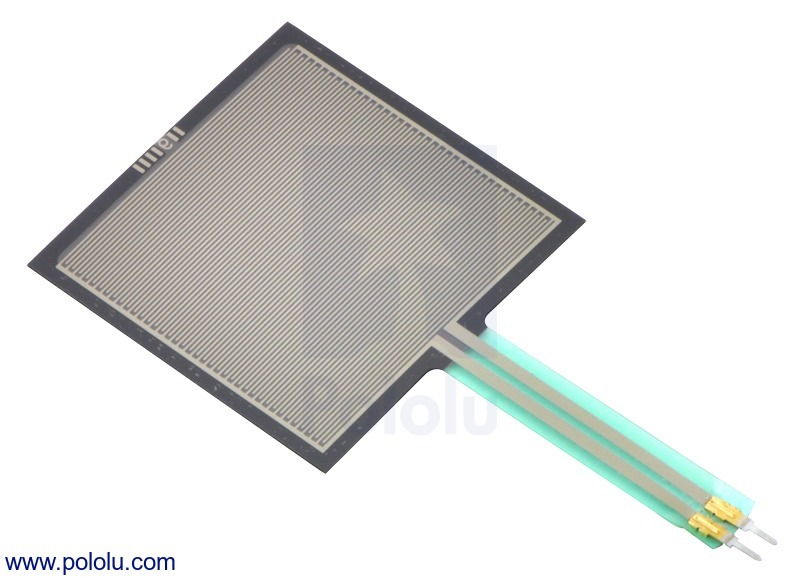 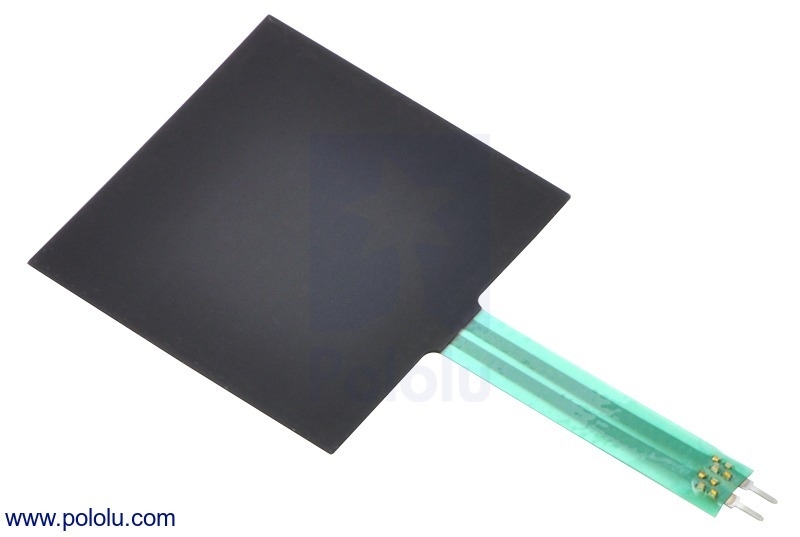 This force-sensing resistor (FSR) from Interlink Electronics is a passive component that acts as a variable resistor, with resistance decreasing in response to increasing applied force, which makes it easy to add a touch interface to your project or create a robot with much more sophisticated tactile senses than are possible with simple lever switches. The polymer thick film (PTF) device is optimized for use in human touch control of electronic devices and can sense an applied force anywhere in the active area ranging from a few dozen grams to a few kilograms (0.2 N to 20 N).

In our tests, the resistance exceeded 1 MΩ with no applied pressure and dropped to a clearly detectable and very stable 50 kΩ with a 20 g weight placed on it. Pushing on the pad as hard as possible dropped the resistance to around 200 Ω. This resistance range is well suited to work directly with the internal pull-ups of many microcontrollers such as AVRs and PICs. The FSR was responsive enough and sensitive enough to distinctly pick up light, rapid finger taps, and it was even able to pick up the vibrations of a small vibration motor placed on it on the motor’s side.

The 1.72″ square pad is flexible, light (1.2 g), and extremely thin (0.02″), and it has an active sensing area of 1.56″ × 1.56″. It does not appreciably compress when pressure is applied. The FSR has a masked adhesive backing for easy mounting, and the 1.7″ flexible leads give you a convenient way to integrate the part into your project. The two male pins (called “solder tabs”) have a 0.1″ spacing, which means they are compatible with most solderless breadboards and perfboards, though the solder tabs are too short to work well with many 0.1″ connectors.

Note that this FSR is not a load cell or strain gauge, and it is not suitable for precision force measurements. While it can be used for high-resolution dynamic measurement, only qualitative results are generally attainable. Force accuracy ranges from 5% to 25% depending on a number of factors, and the resolution is better than 0.5% of the full range. Please see the resources tab for more information, including force-vs-resistance curves, integration notes, usage tips, and suggested electrical circuits.